skip to main | skip to sidebar

The Timaru Sundial Trail was written by Rosaleen Robertson and Reid Cowan in 2007.

Timaru is on the east coast of the South Island of New Zealand; it is ideal as a stopping point for travellers on State Highway 1, being roughly half way between the main centers of Christchurch and Dunedin on the scenic coastal route; it could be a timely refreshment stop and is definitely a worthwhile sundial trail stop.

The first five sundials can be enjoyed in less than one hour if travelling by car, the distance one way is 5 kilometres (alternatively this would be a lovely urban walk).

The sixth sundial is in the countryside, through the beautiful rural rolling landscape. The distance from sundial 5 to 6 one way is another 6.5 kms, so this adds another half to three quarters of an hour to get there and back to the city.
All up, the entire trail is approximately 90 minutes to two hours, but do allow much longer as you will find Timaru attractive and the local people friendly.

This is a significant monument, a fine construction and work of craft and art. It is classical, elegant, poignant, artisan and "probably Timaru's most prominent sundial." 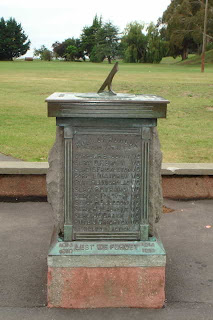 The sundial is located at about the center point along the Memorial Wall.
The purpose of the sundial "was to bear the roll of honour listing the 11 Victoria Crosses won by servicemen during the war".

The sundial maker was Mr James Stewart of Invercargill , a well-known sundial maker of the times being credited with approximately 200 dials.

On this dial the detail includes signs of the zodiac and Roman numerals, and the mottos are: I count not the hours unless they be bright HORAS NON MUMERO NISI SERENAS. Care needs to be taken when reading this dial as here is no mention of the necessary 35 minute longitude correction.

Click here for the details of Timaru Sundials Trail  http://www.sundials.co.uk/~timaru.htm
Posted by Campervans and Sundials at 8:36 PM 1 comment:

New Zealand1 & 2 according to CNN3 is now the second best tourist destination in the world, with ('s capital city), a 'great kind of springboard' to the rest of the country. is also (according to Lonely Planet4) one of the coolest little capitals in the world.

So, armed with that background, and a chance to participate in Sundials on the Internet5 and the British Sundial Society6 Sundial Trail competition, my friend , and I, Rosaleen Robertson, created The Wellington Sundials Trail.

A word for those who have never given sundials a second thought before now, whatever your interests: scientific, aesthetic, historical, keeping fit or discovery, our promise is that you will not be disappointed. You just need to give it a go.

A note of caution however, the pursuit of sundials has been known to be quite infectious and you too could find yourself a committed sundialophile7 like me. And with this in mind I've provided some tips (Appendix A, B and C are in a separate pdf file here), Appendix B provides details of the numbered references shown in superscript.

In our capital city during the 1970s extremely popular evening classes on Herbs and the Use Of were conducted by Lorna Rowland. My friend Pauline and I attended these.
Being highly motivated to learn more about growing and cooking with herbs, we did not take any persuading to join the Wellington Herb Society. At this time the Herb Society was active in establishing an herb garden and gifting a sundial.
This was the first sundial I had anything to do with. The sprig of rosemary adds a special touch. Rosemary, in the language of plants, is for rememberance hence the symbolism of its use on ANZAC Day, in rememberance of 'those fallen in battle'. There are a number of sundials throughout New Zealand that have been commissioned to commemorate bravery and the sacrifice of life at war.

Now to explain something about the structure and function of the sundial. The vertical part that stands up (perpendicular) from the sundial face is called the gnomon (pronounced noh-mon).

The gnomon casts the shadow that falls onto an hour mark from which the time is calculated. Gnomon is an ancient Greek word meaning: indicator, one that knows or discerns, that which reveals or shows.

The direction and angle of the gnomon are two of the essentials for 'time-telling accuracy'. The direction is marked by the symbol N as all sundials must be north facing for the shadow to fall accurately. Sundials are designed for either southern or northern hemisphere positions.

If you look above you'll see from the shadow falling off the west side of the style, that I made an early morning visit to the Herb Garden in the Wellington Botanic Garden.

Sadly gnomon vandalism can be an issue.
Evidence of this may be seen in the photo above where the gnomon does not appear perfectly straight and in the photo below (taken 15 years ago) the gnomon is completely gone. In a future postings I plan to:

I hope you'll find this interesting.

So, back now to the Wellington Herb Garden sundial, does anyone have information about it? Who made it, details of the stone base and who installed it?

If you are interested in discovering more about Lorna Rowland and the Wellington Botanic Garden Herb Garden go to the Friends Newsletters: February 2002 and May 2002 by clicking: http://friendswbg.org.nz/newslettersabout.htm

Posted by Campervans and Sundials at 4:59 PM No comments:

Fifteen years ago following the discovery of the Cheviot School
sundial a passion (or maybe an obsession!) was sparked.
Since then I have been enthusiastic about finding and recording sundials and meeting sundialophiles.
The motto on the beautifully engraved dial face is
LUX TUA VITA MEA.
A plaque on this elegant base showed it was presented by M.J. Read. Two years ago all that remained was the concrete slab and four rocks.
I wonder what happened to this sundial?
.
Posted by Campervans and Sundials at 8:10 PM 2 comments:

Will you re-visit this blog?